Cardiologist or Computer: Who Can Read EKG Better?

Nowadays most of the ECGs have computerized interpretation and overall, a diagnosis is also provided by the computer algorithm. Most of the time, these EKG interpretations are correct. However there are times when the computer algorithm misses the diagnosis completely or gives a wrong diagnosis altogether. In this contemporary time of medicine, most internists and family physicians have started to rely so much more on the computers that they are losing the EKG interpretative skills. We would like to demonstrate through this article that we need to get back that skill so urgently.

A 66-year old man presented to the local emergency room recently one night with epigastric distress and abdominal pains. He was diagnosed with GERD (Gastroesophageal reflux disease) and a treatment protocol was advised. His resting 12-lead ECG as per the computer interpretation revealed ‘atrial fibrillation’ (Figure 1). He was given subcutaneous heparin for a few days followed by Warfarin to be started for anticoagulation. 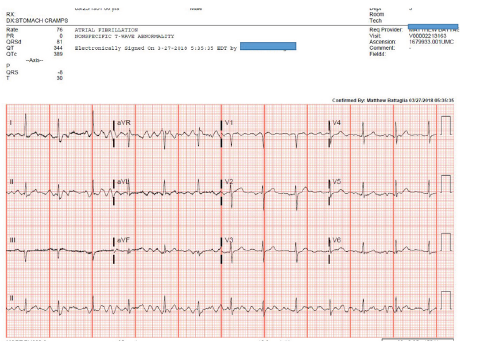 His son called me early in the morning and discussed his father’s medical diagnoses and wanted his father to be seen in my office as soon as possible. Two hours later he was in my office and a repeat 12-lead EKG (Figure 2) and a 2D-echocardiography were performed. His Echocardiographic study was unremarkable. His EKG was normal as well without any atrial fibrillation. 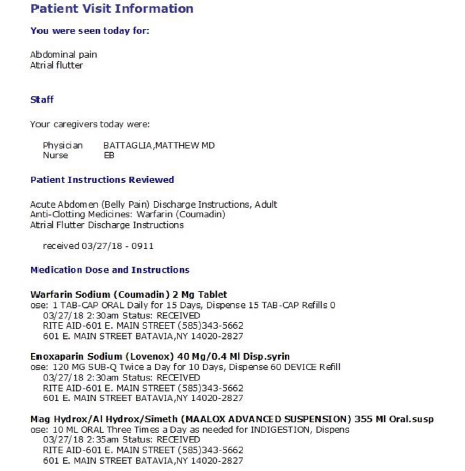 Figure 2: Based on this reading, Lovenox and Warfarin were recommended to the patient!

Looking back at his EKG from the emergency room, it is clear that the EKG showed baseline artifacts which were interpreted by the computer as being atrial fibrillation!

What are the consequences of reading an ECG as being atrial fibrillation while the patient does not have it? Well, he was placed on long-term anti-coagulation for no reason and therefore obvious issues are: wrong diagnosis, wrong treatment, risks of bleeding, malpractice issue etc.

A young nurse with history of palpitations was eventually diagnosed with SVT (supraventricular tachycardia) and underwent catheter ablation a few years back. She came to the emergency room with palpitations and her telemetry showed the following rhythm strip (Figure 3).

Figure 3: Rhythm strip in ER being interpreted as SVT (computer reading as VF/VT).

This rhythm strip shows that the patient remains in normal rhythm and her QRSs continue to march regularly through all the artifacts!

Here we have a case of biased diagnosis of SVT because she had been diagnosed with this condition before. In addition, the computer looks at all the ‘wide complexes’ and called it VT/VF!

The first human electrocardiograms (EKGs) were recorded more than 125 years ago. The first attempts to automate EKGs go back to the late 1950s [1].

At least one person per 5 annual health examinations gets an ECG. As per the latest evidence, there are about 300 million EKGs performed in the US annually. The market expenditure for the year 2015 for the EKGs was expected to reach about $200 Million [2].

Based on these two case reports as mentioned above, one can imagine the extent and severity of under- and over-diagnosis, wrong treatment, adverse outcome and possible malpractice case scenarios. Now you multiply all that knowing that there are 300 million EKG performed annually in the US!

“To err is human; to really foul things up requires a computer!” “Computers have lots of memory but no imagination!” Computer is only as good as its programming.

EKG is certainly the most performed test in the practice of clinical cardiology. For the last six decades, more and more clinical medicine and its procedures are being computerized including EKG interpretation. In spite of so much advancement in computer technology, the ECG interpretation by the computer remains far from being perfect. As early as mid-70s, there was a study [3] evaluating the accuracy of computer interpretation of EKGs?

There were 5 different computer programs interpreting the EKGs. The study concluded that computers were not as accurate in reading EKGs when compared with experienced cardiologists.

Overall accuracy of computer reading of EKGs was 80% and the computer was often quite poor in arrhythmia interpretation. That study made a recommendation that all computer-read ECGs should be over-read by an experienced physician.

A large international study compared the performance of 9 computer read ECGs programs with that of cardiologists in interpreting EKGs in clinically validated cases of cardiac conditions [4]. Overall sensitivity of the computer programs was significantly lower than that of the cardiologists in diagnosing left ventricular hypertrophy, right ventricular hypertrophy, anterior myocardial infarction and inferior myocardial infarction. The median accuracy was 6.6% lower for the computer programs (69.7%) than for the cardiologists (76.3%; P<0.001).

The questions: What are the sensitivity and specificity of computer-generated EKG interpretation? Comparisons of the accuracy of computer EKG analysis with that of expert electrocardiographers demonstrate 58-94% of disorders are classified correctly, with arrhythmias being the most problematic diagnosis. Sensitivity is lowest for ST-segment or wave changes (83.1%). This represents the most common category of misinterpretation, with a false-negative rate of nearly 17% [5].

Speaking about the rhythm, atrial fibrillation is undoubtedly the most common arrhythmia seen in clinical cardiology practice.

Computer-interpreted EKG (CIE) programs have a frequent tendency to over-diagnose atrial fibrillation, especially in elderly people potentially leading to inappropriate administration of harmful medications. In one study [7], the computer made the wrong diagnosis of atrial fibrillation in 19% cases! In 10% cases, the physicians did not rectify the diagnosis by ordering repeat EKGs thus leading to unnecessary antiarrhythmic Rx and anticoagulation. Based on this wrong diagnosis, additional unnecessary tests were ordered in 24% of these cases.

In addition, the computer interpreted EKG (CIE) programs have wide variability for reading ST-segment myocardial infarction. The false positive rate can be 0-42% and false negative can be 22-42%. Therefore CIE cannot be recommended as a sole means of activating an emergent cardiac cath. lab. EKG artifacts and non-ischemic causes of ST elevation could be the most common reasons for incorrect interpretation of STEMI [8].

Does it matter if the EKG is being read by non-cardiologist vs a  cardiologist? Well, it could! One study [9] revealed the non-cardiologist physicians’ accuracy rate of 36-96% in detecting EKG abnormalities and only 87-100% successful at detecting acute myocardial infarction. In the same study, computer automated analysis has been shown to be inaccurate 6-42% of the time!

Also, CIE programs can underestimate QT interval measures and under-diagnose paced rhythms. Computerized algorithms are very challenging for accurate QT measurement. Diagnostic accuracy of screening EKG in long QT syndrome (LQTS) has been reported to be quite unsatisfactory. CIE program measured global QT interval is generally longer by as much as 30-40 msec. compared to the QT interval measured in any individual lead. One study reported that the algorithm CIE did not diagnose prolonged QT in 52.5% cases [13]. Similar under-reporting of prolonged QT interval in patients on methadone has been documented [14].

Automated computer interpretation may significantly affect physicians’ EKG reading abilities. It improves their diagnostic capabilities when the interpretation is correct, however it will increase the probability of error when the diagnosis is incorrect. One study has shown that these wrong diagnoses may account for up to 10,000 adverse effects or avoidable deaths worldwide annually [10].

Medical residents have a low proficiency and self-perceived confidence in interpreting EKGs. Cardiologists as primary readers more often correct the misinterpreted EKGs, as compared with internists or others specialists. In the United States, cardiology fellows are required to interpret about 3,000-3,500 EKGs during their standard 3-year training program to acquire competence in EKG interpretation. Training to review, edit, and amend EKGs generated by the computerized system that provides preliminary interpretation is part of their training [12].

One Time I wish There Was Computer Reading of An EKG (Or May Be Not)!! I finished my medical school and a year of internship in 1983 in India. I completed my pediatric residency in 1986 and worked as a pediatrician until I moved to the US in 1988. The year was 1990. After passing certain tests (those were called Part I and II ECFMG), I had started then my internal medicine residency (a switch from pediatrics in India to adult medicine in the US). That was my first week posting in the emergency room as a first year intern! I do not recall most EKGs in that emergency room being computer-interpreted. Back in India, my exposure and experience in pediatric EKGs was likely bare minimum as we dealt mostly with a lot of infectious diseases and growth and developmental issues in pediatric clinic than cardiac and congenital issues where EKGs would be of paramount importance. That fateful day in the emergency room, I saw an elderly man who was not feeling well. I did not recall him having chest pains, palpitations or short of breath. I looked at his EKG but did not pay any attention (not that I knew how to read EKG during first week of my rotation). Sometime later, the attending physician in the ER talked to me and looked at that EKG. She was somewhat bewildered, somewhat surprised and then angry at me as well. She said, “Don’t you know how to read an EKG? This man just had a heart attack!” She asked a nurse to give him aspirin and another medication and took that EKG right to my Chief Resident to complain about my lack of EKG interpretations! 10 minutes later, I was called to the Chief Resident’s office about that EKG. I told him about my side of the story: my lack of EKG reading in India, my prior experience in pediatrics and none in adult medicine and number of years gone by since any experience with EKGs during my medical school days. He understood my difficulties and dilemma. I can never forget that day when I felt so embarrassed and humiliated. I promised to myself that one day I will have the ease and experience of reading EKGs without any difficulties. That day in the emergency room was one reason I choose cardiology as my specialty and I have taught EKGs to hundreds of medical students, the residents and the internists since then. I have read thousands of EKGs myself ever since! If that EKG was computer-read and the reading was correct, it is quite likely that I might not have become a cardiologist!

Copyright: Mishra JP, et al. © 2019. This is an open-access article distributed under the terms of the Creative Commons Attribution License, which permits unrestricted use, distribution, and reproduction in any medium, provided the original author and source are credited.

Hypocalcemia-induced Camel-hump T-wave, Tee-Pee sign, and Bradycardia in a Car-painter of a Complexed Dilemma: A Case Report

Hypocalcemia-induced Camel-hump T-wave, Tee-Pee sign, and Bradycardia in a Car-painter of a Complexed Dilemma: A Case Report

How Does aVR QRS Amplitude Compare with NT-ProBNP in Monitoring of Patients with Heart Failure?

Cardiologist or Computer: Who Can Read EKG Better?

A Tale of Two Treatments

Open Access by Magnus Med Club Ltd is licensed under a Creative Commons Attribution 4.0 International License. Based On a Work at magnusmedclub.com